Six Things I Wish I Knew as a New Manager

Being a first-time manager is hard. And no matter how much preparation you’ve done, it’s always going to feel like the deep end. I became a manager for the first time in the middle of 2017. As time ticked by, there were so many times I thought I wish someone had told me this.

So, three years on, I’ve decided to share six of the things I’d known as a first-time manager.

“Trust your gut”, they said…

There’s more to it than that. Don’t take this throwaway phrase at face value. We do need to trust our instincts as leaders, but it is not just about stabbing in the dark based on a feeling. Our intuitions need to be based on data and/or the opinion or insight of others.

This cost me very early on. I made a terrible hiring decision because someone encouraged me to “trust my gut” – but I had naively plucked a feeling out of the air and ignored the facts almost completely.

Once we’ve gathered all we can, that’s the point where we have to “trust our gut”. And that means we can do it with confidence that what we’ve chosen is justifiable and, to our best knowledge, the best option for the best results.

It’s easy to be so scared of messing something up that you end up shying away from making big decisions on your own. I still do this sometimes. But your manager and your peers are not there to do your job for you. If you’ve got an idea and you can’t ask someone’s opinion, look at the data. Learn as much as you can about it. Make an informed decision.

Better to apologise for taking initiative and being bold than for doing nothing.

Being someone that sticks to promises is crucial for raising your profile as someone with integrity. And that includes promises about when things are going to get done. If you don’t do what you say you’re going to do, nobody will ever respect you – and it is very difficult to repair a reputation tarnished by months or years of breaking promises.

It’s tempting, as a new leader, to set ourselves really ambitious goals in order to impress our overlords. But when we inevitably miss them, we have nobody but ourselves to blame. Now, doing a good job as a leader means being realistic. This is not a game to see how far you can stretch expectation to make yourself look good like Scotty of Star Trek (you’ll be riddled out). 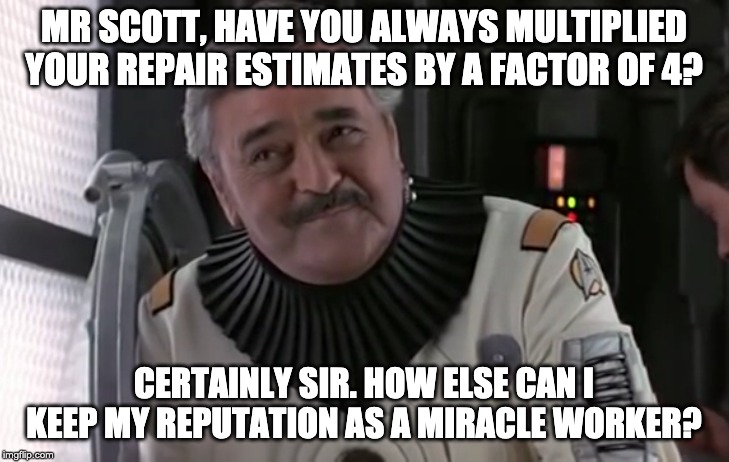 But it’s okay to build in realistic contingency time for when things go wrong, or factor in time for things to take longer which are outside of your control. And you’ll find that if you don’t, you’ll start consistently missing your own deadlines. Avoid over-ambitious projections and set realistic targets.

As we grow as a managers, it’s crucial that we give our teams the experiences they need to grow.

If you’ve been given management responsibility, you’re probably the kind of person that likes to get jobs done fast and to the best of your ability. That sometimes means the fastest way to do a job is to do it yourself, even if someone else is qualified to do it. But giving your employee the chance to try it gives them the chance to solve the problem in their own way and learn. Chances are, there’s something they do that they will do better than you, and you can both learn from each other.

On the other side of this, failing to delegate can mean overburdening yourself, and others might start feeling like you are stepping on their toes.

Have faith in your team. Our job is to make sure our team understand what’s expected and how to get there. If they feel trusted to do a good job, there’s a much better chance they actually will!

Oh, and never abdicate. You’re responsible. Not them, over there. Not the person you delegated to. You. (Sure, maybe they’re a bit responsible, but it’s your job to take responsibility)

Get it in writing

Work at a smaller company? Welcome to my world.

No matter the best intentions of the people around you, you’ll likely find that someone, somewhere, doesn’t follow through on what was said.

And it’s probably not because of malintent. It’s just because small businesses lack procedure and formality. Which means people will say what’s easy at the time, and two parties will go away thinking they’ve understood. After many weeks, months or even a year or two have passed, people will have remembered what they want to remember. Perhaps it’s who was responsible for arranging food for an event, or what the process would be for recruiting new staff – or even something as important as when someone’s pay would next be reviewed and what the process would be.

Remember, usually, nobody’s trying to be dishonest – but no matter how good the organisation is that you work for, get it in writing.

My first manager taught me that if you’re not making mistakes, you’re not doing anything. It’s part of the “fail fast” mentality. You’ve got to be willing to try things out and experiment. Don’t hide it when things go wrong – you’d respect your subordinate much more if they just outright told you what went well and what didn’t, instead of trying to sugar coat everything. You’d find out anyway, right..! It’s very alienating for people when you try to hide mistakes and cover up your flaws and the gaps in your knowledge. Just admit you don’t know, or that you made a mistake, or that it’s your fault. Nothing builds respect faster.

Bonus: If you wouldn’t do it yourself, don’t make somebody else do it.

Firstly, can you really live with yourself knowing you’re palming off all of the rubbish work on someone else? YES, delegation is important. But if something is truly that bad, why would you make someone else do it?

Generally, if a job is that bad that I can’t bear to do it myself, I usually do it myself. This has the added bonus of meaning your team will likely respect you and appreciate you for getting your hands dirty.

Be kind. I like to think I have a brilliant relationship with my employees, and that’s been built through honesty and by treating them like humans. Sounds obvious, but so many managers aren’t like this at all. I care about my employees, and you should too. Happier employees work harder, produce more and share their ideas. It’s possible to manage someone effectively and show them you care about them as a person at the same time. And the nicest part is, the feeling will be reciprocated and motivate you in return, and make you happier too.