Professor Sir Roger Scruton sadly died on 12th January 2020. At the time, I was just finishing this post. He left behind a rich intellectual legacy, most notably in aesthetics and conservative political philosophy. Perhaps, then, this is the perfect moment to revisit his work.

Because I believe that most questions in aesthetics and the philosophy art are not truly ontological questions (or: they don't ask questions about what there actually is, but about what humans think there is), I don't think there's any fact of the matter about whether photography is art. So I thought this would be a great chance to write some neutral philosophy.

Since the middle of the 1800s, people have been objecting to the categorisation of photography as art.

Roger Scruton did not believe that photographs are works of art. His view is explained in his essay Photography and Representation, published in the early 80s, which is still regarded as one of the most important essays in the philosophy of photography.

My aim is to explain his argument in a lightweight manner and to have a little delve into whether it stands up.

Scruton didn't believe that it is possible for a photograph to be representational art, because photography is not capable of representing. In order for something to be considered a work of art, it would need to sustain an aesthetic interest in and of itself. Let's see why Scruton felt this did not apply for photographs.

Scruton invited us to compare photography with paintings. It seemed to Scruton that painters could inflect additional meaning into their paintings, like Picasso making a powerful political statement during the time of the Spanish Civil War through his famous work Guernica.

But a photographer cannot, Scruton thought, inflect further meaning into a photograph without looking outside of the pure photographic process. If Painting P is of X, it doesn't necessarily mean that X exists. But, according to Scruton, photographs are purely causal and non-intentional entities. If Photograph R is of Y, it entails the existence of Y.

He thought that taking an aesthetic interest in a piece of art couldn't just be about an aesthetic interest in the thing represented in the art, but of the art itself. This is where the art gains its meaning. We can ask meaningful questions about why the artist chose to depict someone in a certain way, for example. But this dimension is entirely missing in photography. If you find a photograph beautiful, it's simply because you find the subject beautiful.

For this reason, Scruton says, photography can be called transparent. If you like, we're almost looking through the photograph and seeing the subject itself.

And so what we're assessing aesthetically are not representational features, but instead features of the thing which has been photographed.

Since Photography and Representation was published, numerous philosophers have responded by questioning various premises of his argument or by elaborating upon the process. I want to look a little bit more closely at some of the most interesting of those arguments: the role of causation, the role of decision and the concept of transparency; which have all been discussed over the last few decades.

The Role of Decision-Making

Scruton thought that in order for something to be a work of art, a photograph would need to sustain aesthetic interest in and of itself. In turn, this can only happen if photographs are representational – but Scruton argued that's not the case.

Dawn Phillips doesn't agree. She believes that Scruton's mistake was to misconstrue the role of causation.

Now, Scruton contended that intention is not an essential part of the photographic relation – indeed, they are "merely causal". But it doesn't look immediately as though photographs are merely causal. Consider a tide line in the sand created by the rise and fall of the sea. This looks to be merely causal. There was genuinely no intention in the creation of this tide line. Photography doesn't seem this way at all. They are deliberately produced – there is an intention to create them.

This casts some doubt, but I'm not sure it goes far enough. What impact does it really have if photography turns out to be entirely causal or non-causal? I'm not sure that an answer either way would be enough to say whether photograph is art or not. But we can go further by thinking a bit more about the role of decision-making in photography.

Scruton wrote that it is "neither necessary nor even possible that ... intention should enter as a serious factor in determining how the picture is seen". But that doesn't seem immediately convincing at all. Luckily, Jiri Benovsky has done the homework for me here with some brilliant counter-examples. He demonstrated a number of ways in which decision-making impacts the mental state that is created by looking at a photograph, and that these decisions are clearly intentional. Indeed, this in turn strengthens the case made by Phillips.

First, we need a new concept, introduced by Robert Hopkins: factivity. An experience of looking at a photograph is factive because it puts us in a factive mental state. These mental states "capture how things are".

Now, let's look at some of Benovsky's cases. Let's start with aperture. Now, blurry photographs are not factive, they don't capture how things are. We might be able to say that at best, they're partly factive. So aperture directly influences the extent to which we see things "as they are". Secondly, the focal length used to take a photograph must be defined. There is a natural distortion depending on the focal length. But it's arbitrary to claim that one focal length is more normal than another. It's more evidence photographs aren't fully factive. Finally, shutter speed defines the length of exposure, and can lead to blurriness. Indeed, a very lengthy shutter speed can create the illusion that a street is empty when in fact there are dozens of people moving around.

What we can see from this is that while a photograph might entail the existence of the objects photographed, it may still fail to capture how things are in reality (or: fail to be factive) in other important respects, such as the properties of the objects photographed. Photographs are taken in the light of what Benovsky calls "necessary decisions" which undermine Scruton's argument that photography is a purely causal process. I do think that some necessary decisions are weightier than others, but these are still clear counterexamples which at the very least suggest there is a spectrum when it comes to photography being factive or indeed causal, and surely pose a problem for Scruton.

Even if this is the case though, I'm not entirely convinced that whether photography is art or not rests upon this debate about whether they're causal or not, or how many degrees of decision-making we must go through in order to call something 'art'. It seems to me that we could argue that paintings (for example) are causal, too, after all.

Benovsky's examples are interesting. They do more than call into question whether taking a photograph is purely causal. They also call into question Scruton's claim that photographs are transparent - and I think there is an important bit of refinement we should do here.

As Kendall Walton notes in Marvellous Images, photographs can be opaque! By manipulating exposure or contrast for example, we can get a huge amount of control over what is seen. 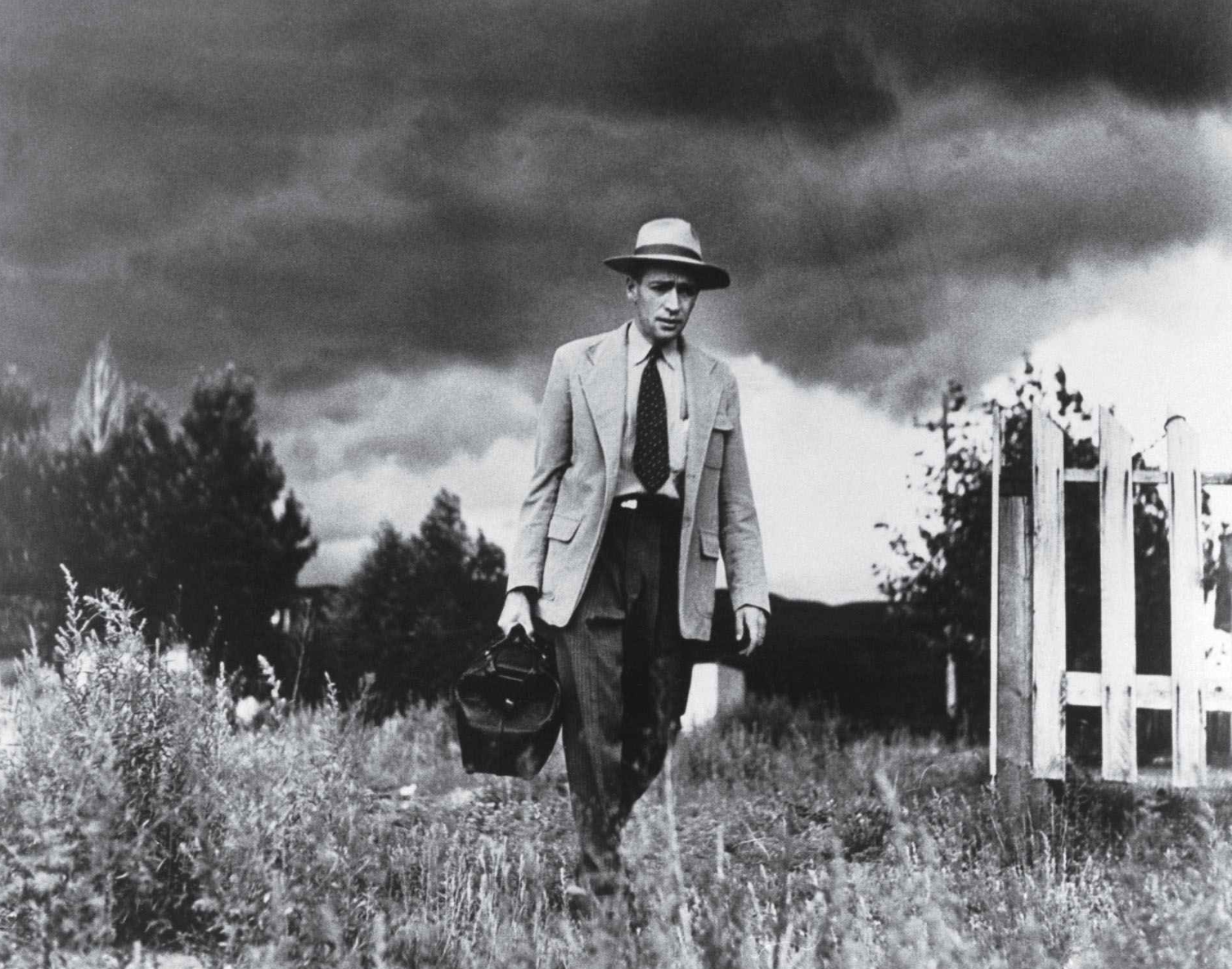 This is Country Doctor by W. Eugene Smith, a famous photograph taken in 1948. Euguene Smith aimed to present his work in such a way as to help the viewer see the world from the perspective of his subjects. And it certainly seemed that he was successful in achieving this aim. So there must have been some features of the photograph over and above the subjects themselves that enabled this – features of the photograph.

I think this is pretty pivotal. Yes, a photograph of X implies the existence of X. But it doesn't mean that the properties of X shown in the photograph are true-to-life. A number of artistic decisions may be taken to create a photograph. Decisions about aperture, focal length, context inclusion or exclusion, framing, drawing attention to features of reality. Photographers can define a mode of presentation for reality through a string of decisions. The extent to which these factors are considered, for me, weigh on our assessment of whether it is really art.

So what's the verdict?

If we grant that we can (theoretically) meaningfully define what is art and what is not, for me, photography is usually more transparent (than say for example, a painting) and usually less representational – but there are degrees of both. We might then allow that it may fall under the category of "art", for there certainly seem convincing reasons to think that there was an intention to create art, and that photographs can succeed in representing.

Or we could just throw all of this in the air and refuse to talk about the topic at all, because we're existence monists (anyone else? No?!). I will likely revert to a more pedantic style of philosophical writing next time out!

Dawn Phillips (2007) The Real Challenge for an Aesthetics of Photography

Dawn Phillips (2009) Automatism, Causality and Realism: Foundational Problems in the Philosophy of Photography

David Davies (2009) Scruton on the Inscrutability of Photographs