How to Ask About Gender in Forms Respectfully

In tech, there are "edge cases". But there are no such thing as edge case people.

For some people, something as simple as filling in a form can be a frustrating, demeaning experience. Sometimes something as small as a poorly-designed form field can remind someone of their experience of feeling different, unwelcome or even invalid.

It's often necessary to get information about people through forms. So it's important that we take a few moments to make sure we are asking these questions in an inclusive, respectful way.

Over the last couple of years, it's been part of my job to decide how to build a number of forms where we've needed to think really carefully about the questions we ask and how we ask them. I've done a fair amount of research into how to write respectful, ethical forms and thought I would share what I have learned.

What are we using the information for? Would not collecting it cause a problem? Will people feel comfortable answering? If we ask ourselves why we're requesting a particular piece of information from someone, and nobody can answer, it's probably a good sign we shouldn't be asking at all. This thought process also helps us explain to our user why we're asking. If we can give a good explanation, they'll likely be happier to give that information.

For every additional piece of information we ask, each may feel at best time-consuming, and at worst invasive or even offensive. And the more we ask for, the more likely it is people won't even bother to fill it in anyway!

Building our form: the worst case

Let's look at the worst case, and use it as a starting point. It's no longer enough to simply force people to select "male" or "female" in forms. If we need the information, we need to be far more thoughtful about how we ask about gender.

Usually, it's not someone's sex we want to know about. Unless we're writing a medical form, we're likely more interested in gender.

Whilst sex is more about physical biology, gender is more about who we are as people. For some people, their sex assigned at birth doesn't match their gender identity. But if we're trying to understand diversity in the workplace, or even who uses our product, we should be far more interested in the way that person experiences the world than their biological sex.

Do we just need to know pronouns?

If the reason we want to know somebody's gender is to know how to refer to them, what we're actually looking for are their pronouns. We shouldn't assume that we know somebody's pronouns from their gender. For example, a non-binary person might use "she/her" as her pronouns.

Not everybody will immediately know what you mean when you ask someone for their pronouns, so make sure you explain why you're asking, and provide an example. 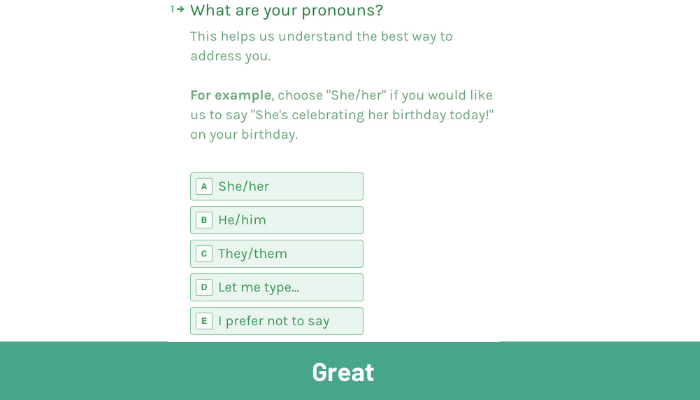 We should always give people a clear option not to give an answer.

Don't make the field compulsory. It should be possible to submit the form without answering a question like this. But that's not all – it should be obvious that we welcome people to not give an answer, so we should include this as an option – for example, "I prefer not to say".

Nobody should feel forced to give us sensitive information about themselves. Often, people decide whether to give this information based on the context, so we should always allow people to decide based on whether they feel comfortable doing so.

"Male" and "Female" are by no means the only genders. Some other genders are non-binary, intersex, transgender, agender, Two-Spirit, genderqueer or gender non-conforming (GNC).

But it's impossible to list every gender, and if we tried, it'd be really confusing. It is usually best to do your research into the gender identities which are most common in your area/field (for example, Two-Spirit is a Native American non-binary gender identity), and be vigilant in including an option for users to type their own answer.

Avoid using the phrase "identify as a...", because some people recognise a distinction between "identifying as a [woman]" and "being a woman". For example, a transgender person might feel that their status as a woman is being challenged by this wording. 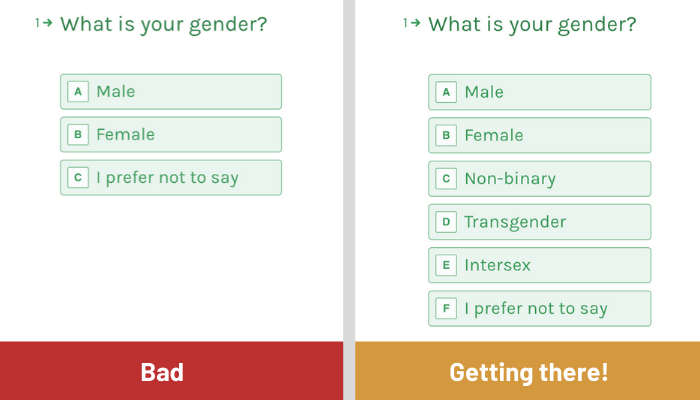 The option to type

It's crucial that we include the option for people to type their own answers. Avoid using the word "Other" as the typing option – firstly, it's not obvious it'll lead to the chance to type, but it's also not nice to feel as though you are an afterthought. 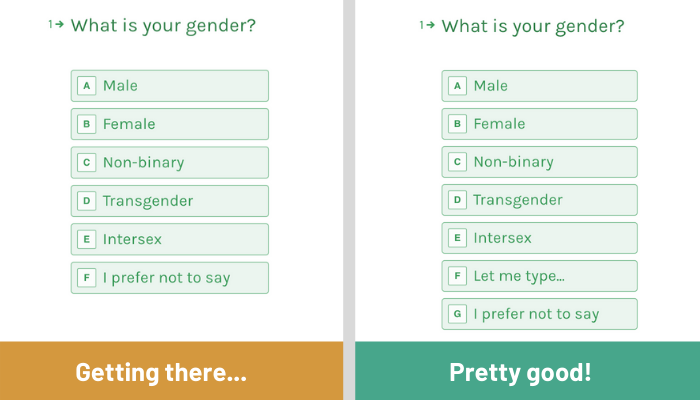 Since the vast majority of forms on the internet place males or men first in lists of options, why not do our bit for balancing things up and – perhaps – challenge people to recognise their own bias? 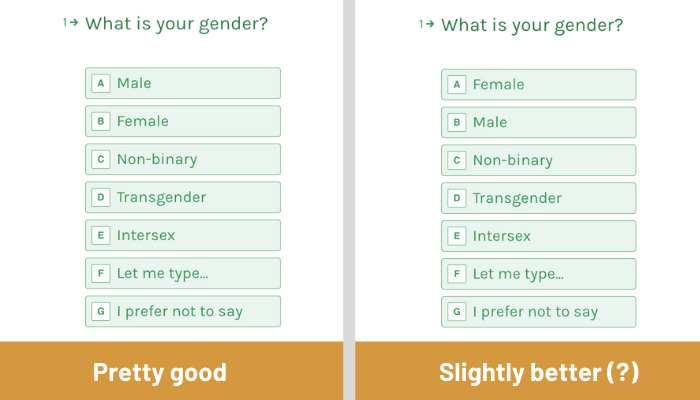 Selecting more than one option

Users should be able to select more than one option.

This is particularly important if we would like to include "transgender" as an option. Why? Because it forces trans men/women to choose between being a man/woman and being transgender (and also might feel a bit strange to choose only transgender, because it might be considered more of a process than a gender category). And it isn't a solution to add "Trans man/Trans woman" as an option, because it may make trans men or trans women feel as though their identity as a man or woman is not valid. Adding "transgender" as a multi-select option gives people the choice as to whether to tell us about their transgender status.

Another option is to ask about transgender identity in a separate question. 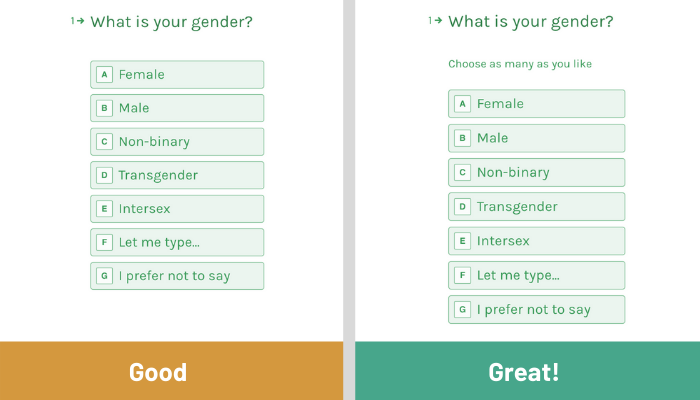 Not everyone has a gender

Some people find they don't have a gender at all. This is a kind of agender identity. To perfect the question, don't make it about having gender. 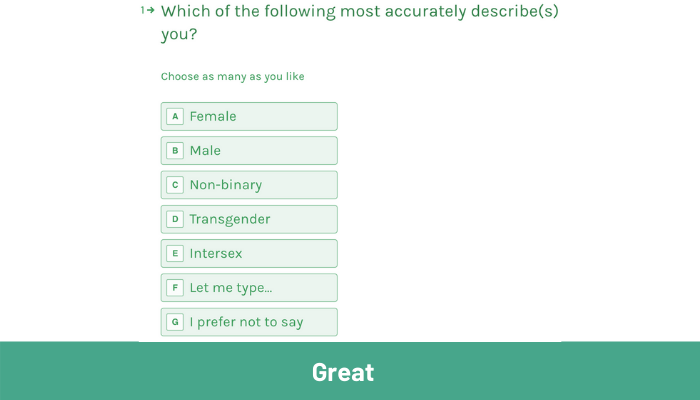 Many businesses these days won't need people's titles. If we're not sure why we ask, we should probably avoid it. 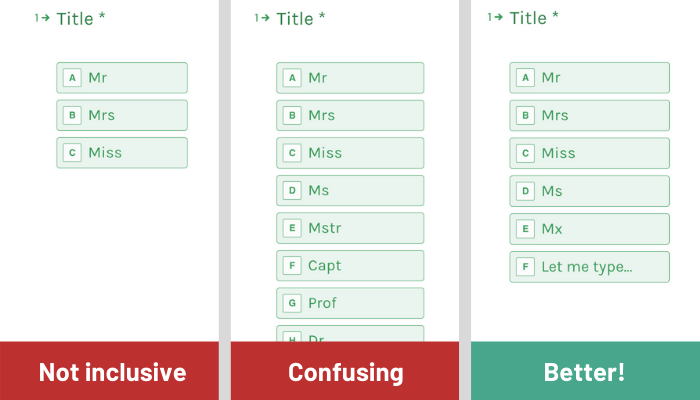 I hope you've found this helpful.

If you notice something I haven't quite got right, I really (really!) do want to hear about your feedback. I am striving to continue learning about these important topics. If you have any recommendations or suggestions, say hi at @RuthYMNg on Twitter.